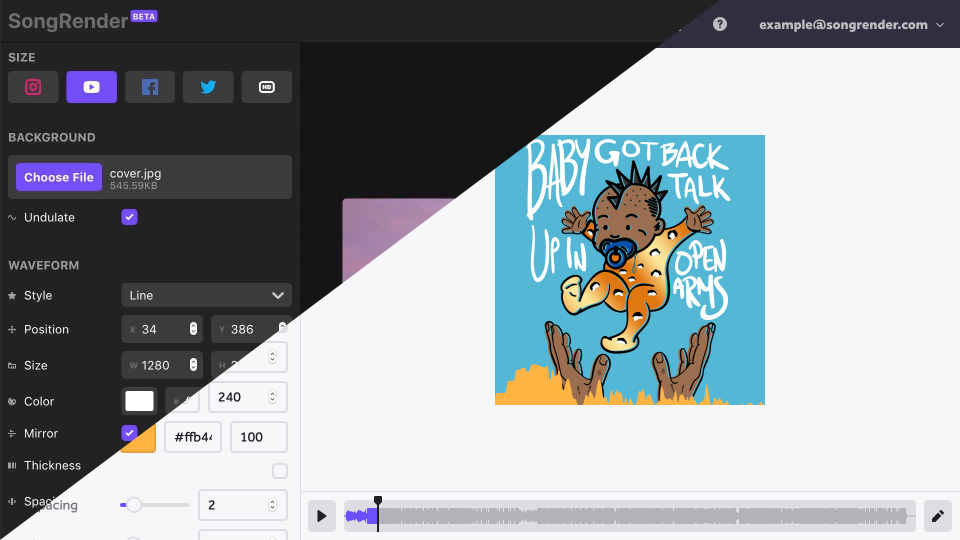 Since then, there have been over 500 videos rendered. Thank you so much to everyone who signed up and made one!

SongRender started as an MVP, or “minimum viable product”. That means it had the bare minimum functionality it needed to be useful to people, and we would slowly build up features as we went. The first version was paid–only, would email your video after it finished rendering and it was impossible to save work in progress — refreshing your browser would lose your work.

Why launch this way? Basically, we weren’t sure whether there was really a market for SongRender. I knew I wanted an app like this for my own band, but were there really people out there willing to pay for videos? Luckily, after a few Reddit posts advertising it, people made 6 videos on the first day!

Confident this was something people were interested in, we got to work on a big release with a bunch of important features. We tried to balance this with bug fixes and smaller features, such as promo codes and free watermarked renders.

Seven months later, we released a huge overhaul of the app. We added user accounts, a totally rewritten editor, a file manager, mp3 support and — gasp — the ability to save your work! Since then, we’ve been at work steadily adding more features, including new waveform styles and app themes.

What’s in store for year two? The next big feature is going to be monthly subscriptions: you’ll get to render videos every month for an even steeper discount than the EP bundle gives you now. After that, there are a bunch of visualization and editor features we’d love to add.

I’d like to emphasize how much I appreciate every person who tries out SongRender. Although I use the “royal we” a lot here, for the most part I’m the only person building this thing. SongRender isn’t my full–time job; I work on it on the side because it’s something about which I care deeply. It’s a labor of love, and I am truly grateful for every person that touches this app.

To celebrate one year of SongRender, we’re making non–watermarked videos free for the next week, and only $1 for the rest of the month. Go make something awesome and get your music noticed!